What type of bike valve does my bike tire have?
What bicycle tire valves can I use on my bike?
Your current bike valve is impractical, and you are considering switching to a bike tube with a different valve type?
What are the advantages and disadvantages of each type of bicycle valve?
Answers to these questions and more can be found in this blog article.

What bike valve types are there?

See below a overview of the three main bicycle tire valve types in the market and their synonyms.

In addition to these three types of bike tire valves, there is also the Regina valve (RV for short), also called the Italian valve, which is mainly used on bicycles in Italy. Like the Sclaverand valve, it has a valve diameter of 6 mm. Due to its low distribution, it is not even offered by many bicycle tube manufacturers, which is why I do not consider it further on ExplainMyBike.com.

Which bike tube valves can I use and which is the best?

Basically, the valve must fit through the rim hole. The automotive valve and the Dunlop valve have the same diameter of 8 mm. The Sclaverand valve, on the other hand, is thinner and has a diameter of 6 mm.

The length of the valve can also be important. Rims with a high profile, such as on some racing bikes, require long valves, while shorter valve lengths are used on small wheels, such as on baby buggies or bike trailers. Occasionally there are even 45° angled valves, otherwise all valve lengths (e.g. 40 mm, 50 mm, 60 mm or 80 mm) can be used well.

On my wheels I prefer to use the automotive valve, because you can easily inflate the tube before mounting the tire, and then you do not pinch it so easily inadvertently between the casing and rim. With the Dunlop valve, this is a little more cumbersome because you have to loosen the valve fitting again for installation. In addition, you can easily inflate a tire with an automotive valve at any gas station if you do not have an air pump with you.

Can I also use an inner tube with a different bike valve? 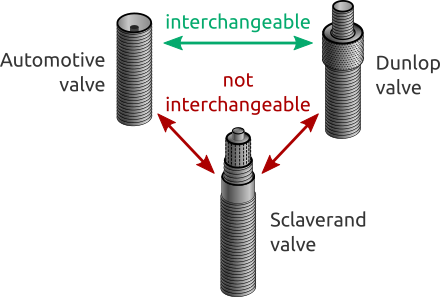 The automotive valve and the Dunlop valve can be easily interchanged, because both have a valve diameter of 8 mm, so they fit in the same rim hole. So when you buy a new bike tube, you have freedom of choice here. Personally, I have always switched to an automotive valve on this occasion, because you can also pump up at the gas station and is more robust.

The Sclaverand valve, on the other hand, has a smaller valve diameter of 6 mm, it can therefore not be easily exchanged with one of the other two valve types. Theoretically, the valve hole in the bike rim can be drilled out if you want to convert to one of the wider valve types. In practice, however, there should be little need to do this; a road cyclist will probably always want to stick with a Sclaverand valve. Conversely, you should not install a Sclaverand valve in a rim with an 8.5 mm rim hole, because then the valve stem can separate from the tube and the tube thus becomes leaky.

What are the advantages and disadvantages of each type of bike valve?

The Dunlop valve fits any simple bike air pump. The valve core can be quickly replaced without tools. Disadvantages are that the air pressure can only be read during inflation with an air pump and the valve core is not secured against theft. If you have not pumped up your bike for a long time, the Dunlop valve likes to hang a little, and you must first build up a higher pressure with the pump to loosen it.

The Sclaverand valve withstands the highest air pressure. It is therefore used as standard on road bikes. More and more often you see racing bikes with aero wheels with particularly high flanks. These require long valves, which are available with the Sclaverand valve with up to 80 mm in length. Alternatively, a valve extension is also available. The air pressure can be measured here even without an air pump.

History: Where do the different names for the bike valves come from?

The automotive valve is used mainly in cars and trucks, hence its name.

The Dunlop valve takes its name from the Scottish inventor John Boyd Dunlop (Wikipedia), who constructed his first air-filled rubber tire in 1887. However, he was not the inventor of the pneumatic bicycle tire, even though this is often claimed, because the Scotsman Robert William Thomson (Wikipedia) had already patented this idea in 1846. This initially fell into oblivion again until Dunlop in turn applied for a patent.

The French bike valve is known by this name because of its French inventor Etienne Sclaverand, see also Sclaverand valve.

The term Presta valve is a synonym for the Sclaverand valve. Presta or presto in Romance languages stands for "fast, hurried, immediate".

The Schrader valve goes back to its inventor August Schrader (Wikipedia). It is more commonly found under the name automotive valve.

The Sclaverand valve is named after its French inventor Etienne Sclaverand (see patent specification) and is therefore also referred to as the French valve.